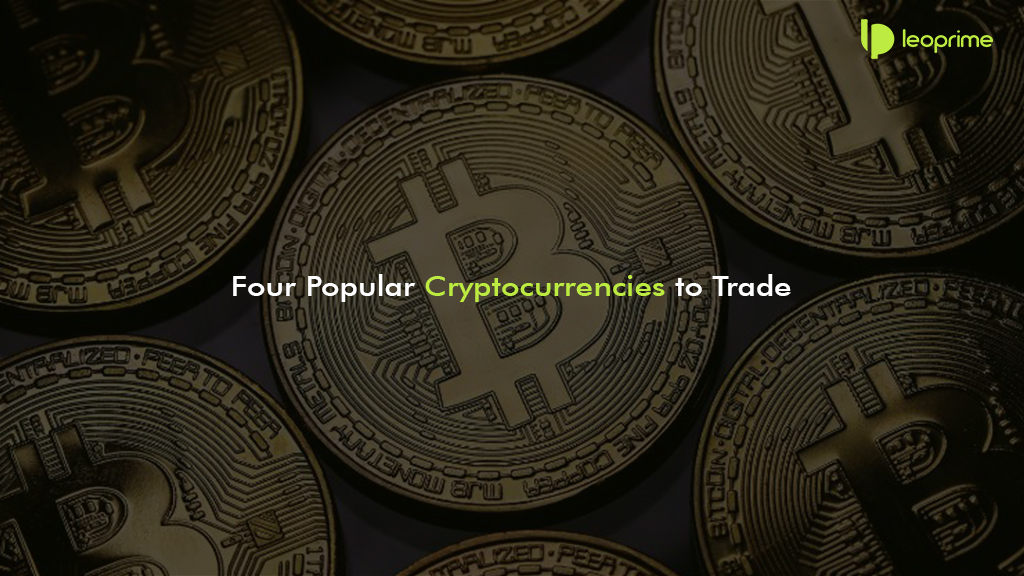 Bitcoin and other cryptocurrencies (known in short as cryptos) are virtual currencies that typically use a decentralised network and allow secure financial transactions. At LeoPrime, you can trade crypto by speculating on their price movements, without actually owning the cryptocurrencies. Like the US dollar, cryptocurrency has no fundamental value in that it is not redeemable for another commodity, such as gold.

In addition, its supply is not determined by a central bank and the network is completely decentralised, with all transactions performed by the users of the system. LeoPrime offers competitive spreads, with zero or minimal commissions charged on any transactions and making it more profitable.

In this section, we will showcase four popular cryptocurrencies which you can start trading with on LeoPrime.

Bitcoin (₿) is the world’s first digital decentralised currency and it is expanding in popularity worldwide and it is highly regarded among currency traders and its volatile nature makes them ideal for trading.

In January 2009, its anonymous creator, Satoshi Nakamoto, mined the Genesis block, or first block on the Bitcoin blockchain. It contained the first 50 bitcoins.

Today, Bitcoin is the most widely-used cryptocurrency, and the project’s source code served as the basis for a number of subsequent cryptocurrencies including Litecoin (LTC).

LeoPrime offers you a personalised Bitcoin over-the-counter (OTC) trading experience. The vast majority of OTC trades are settled same-day, with flat rate fees per transaction, and no crypto withdrawal fees.

Now you can trade Bitcoin against the US Dollar with LeoPrime using our MetaTrader 4 platform.

The Ethereum blockchain was Ethereum was invented by Vitalik Buterin and announced in early 2014. Ether (ETH), the currency that powers Ethereum, is used to pay for the transactions that occur on the Ethereum network.

Its primary purpose is reward the miners who are processing the data transactions on the Ethereum network. Following an initial offering of approximately 60 million Ether.

Additional Ether are released through a mining process, similar to Bitcoin. The Ethereum system went live in July 2015.

Ethereum is a decentralised platform for building applications that run smart contracts, executable functions that run exactly as programmed without any third party interference.

In a nutshell, Ethereum is an open software platform based on blockchain technology that enables developers to build and deploy decentralised applications.

In recent years, Litecoin (LTC) has established itself as the leading competitor to Bitcoin, and now you can trade this exciting digital currency with LeoPrime. The founder of Litecoin, Charlie Lee, based it off Bitcoin’s source code, and said he intended Litecoin to be ‘silver to Bitcoin’s gold’.

Litecoin has been designed to make it very easy to transact and many people are already using Litecoin to make international payments. When you trade Litecoin with LeoPrime you can trade long or short instantly.

Litecoin has a real world value in currency, which goes up and down over time. This is the amount of another established currency (for example USD) one Litecoin unit can be exchanged for.

There are three key differences between Litecoin and Bitcoin:

The distribution of Litecoins’ is done by wallet encryption, that secures the safety of the coins as well as allows you to view your transactions.

Ripple is the name for both the digital currency, Ripple (XRP), and the open payment network within which the currency is transferred.
Founded in 2012, Ripple was originally designed to complement rather than compete with other cryptocurrencies, such as Bitcoin and Litecoin.

On the whole, Ripple fulfils a global need for a cryptocurrency and facilitates cross-border payments without the usual costs and delays associated with other currency transfers because it enables secure and instant trading transactions.

Nowadays, it is even used by many banks as the basis of their own settlement infrastructure. The good thing about Ripple is that it can be traded around the clock, as it does not depend on a particular market being open.

LeoPrime’s cryptocurrency account allows some of the premium cryptocurrencies in the market till date to be traded through off-exchange OTC transactions.